Everything About Devon Energy – $DVN.US the hydrocarbon exploring company 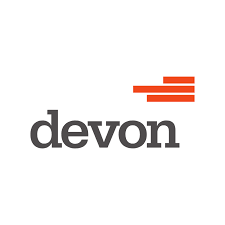 What is Devon Energy’s Background?

Devon Energy Corporation operates as an independent energy company that is involved primarily in oil and gas exploration, development and production, the transportation of oil, gas, and NGLs and the processing of natural gas. The Company also has marketing and midstream operations primarily in North America that include gas, crude oil, and NGLs.

What Devon Energy is doing in more details?

In total, Devon boasts proved developed and undeveloped reserves of nearly 180 million barrels of oil equivalent with more than 2,300 net producing wells. In 2021, Devon and WPX completed an all-stock merger of equals.

Where Devon Energy is Operating?

Subsequent to the sale of Devon’s Canadian business Devon’s oil and gas exploration and production activities are solely focused in the US hence aggregating its US operating segments into one reporting segment due to the similar nature of its business.

Oil, gas and NGL sales account to more than 55% of revenue while marketing and midstream revenues accounted to about 40%.

Where is the geographical reach of Devon Energy?

In the Delaware Basin, Devon’s main assets are in the oil-rich Bone Spring, Delaware, Wolfcamp, and Leonard formations. The Anadarko Basin is located primarily in Oklahoma’s Canadian, Kingfisher, and Blaine.

What is Devon Energy’s Sales and Marketing Strategy?

Devon sells its products under both long-term (one year or more) and short-term (less than one year) agreements at prices negotiated with third parties. The majority of its products are sold at variable, market-sensitive prices.

Devon also enters into financial hedging arrangements or fixed-price contracts associated with a portion of its oil, gas and NGL production.

What is Devon Energy Financial Performance?

Devon’s revenue has been fluctuating for the last five years. The company recovered from losses in 2017 and 2018 but experienced net losses in the next couple of years.

In 2020, Devon’s sales declined 22% to $4.8 billion compared to the previous year. The COVID-19 pandemic and related economic repercussions have created significant volatility, uncertainty and turmoil in the oil and gas industry.

What is Devon Energy Future Strategy?

Devon’s business strategy is focused on delivering a consistently competitive shareholder return among peer group. Because the business of exploring for, developing and producing oil and natural gas is capital intensive, delivering sustainable, capital efficient cash flow growth is a key tenant to the company’s success.

While the cash flow is highly dependent on volatile and uncertain commodity prices, Devon pursues the strategy throughout all commodity price cycles with four fundamental principles.

The company operates the business with the interests of the stakeholders and environmental, social and governance progress in mind.

With vision to be a premier independent oil and natural gas exploration and production company, the work that the employees do every day contributes to the local, national and global economies.

Devon produces a valuable commodity that is fundamental to society, and endeavors to do so in a safe, environmentally responsible and ethical way, while striving to deliver strong returns to the shareholders.

The company owns a portfolio of assets located in the United States. Devon strives to own premier assets capable of generating cash flows in excess of capital and operating requirements, as well as competitive rates of return.

The company also desire to own a portfolio of assets that can provide a production growth platform extending many years into the future. Due to the strength of oil prices relative to natural gas, Devon has been positioning its portfolio to be more heavily weighted to US oil assets in recent years.

As Devon pursues cash flow growth, it continually works to optimize the efficiency of capital programs and production operations, with an underlying objective of reducing absolute and per unit costs and enhancing returns.

The company also strives to leverage the culture of health, safety and environmental stewardship in all aspects of the business.

With the WPX Merger and continuous improvement initiatives, Devon is building a scalable, multi-basin portfolio of U.S. oil assets and aggressively improving its cost structure to further expand margins.

What are Devon Energy’s Mergers and Acquisitions?

In 2021, Devon and WPX completed an all-stock merger of equals. WPX is an oil and gas exploration and production company with assets in the Delaware Basin in Texas and New Mexico and the Williston Basin in North Dakota.

This merger enhances the scale of its operations, builds a leading position in the Delaware Basin and accelerates Devon’s cash-return business model that prioritizes free cash flow generation and the return of capital to shareholders. The combined company continues to operate under the name Devon.

What is Devon Energy’s Background?

Devon was founded in 1971 by John Nichols and his son Larry. It became a public company in 1988, and the next year pioneered in the production of coalbed natural gas in the San Juan Basin.

Over the next decades it steadily acquired big oil & gas companies with the US and abroad to become of the top independent oil companies. In 2018 and 2019 Devon sold off its midstream and Canadian heavy oil businesses as well as other non-core US assets.

What is Devon Energy’s History?

Larry Nichols (a lawyer who clerked for US Supreme Court Chief Justice Earl Warren) and his father, John, founded Devon Energy in 1969. John Nichols was a partner in predecessor company Blackwood and Nichols, an oil partnership formed in 1946.

In 1981 the company bought a small stake in the Northeast Blanco Unit of New Mexico’s San Juan Basin. To raise capital, Devon formed the limited partnership Devon Resource Investors and took it public in 1985. In 1988 Devon consolidated all of its units into a single, publicly traded company.

During the 1990s the company launched a major expansion program using a two-pronged strategy: acquiring producing properties and drilling wells in proven fields. In 1990 it bought an 88% interest in six Texas wells; two years later Devon snapped up the US properties of Hondo Oil & Gas.

After its 1994 purchase of Alta Energy, which operated in New Mexico, Oklahoma, Texas, and Wyoming, Devon had proved reserves of more than 500 billion cu. ft. of gas.

Between 1992 and 1997 the company also drilled some 840 successful wells. Buoyed by new seismic techniques that raise the odds of finding oil, Devon devoted more resources to pioneering fields in regions where it already had expertise.

Also in 1999 Devon grabbed its biggest prize when it purchased PennzEnergy of Houston in a $2.3 billion stock-and-debt deal that analysts called a bargain. PennzEnergy, spun off from Pennzoil in 1998, dates back to the Texas oil boom after WWII.

In addition to new US holdings, the deal gave Devon a number of international oil and gas assets in such places as Azerbaijan, Brazil, Egypt, Qatar, and Venezuela.

On a roll, Devon in 2000 bought Santa Fe Snyder for $2.35 billion in stock and $1 billion in assumed debt. The deal increased Devon’s proved reserves by nearly 400 million barrels of oil equivalent.

In 2001 the company agreed to a major deal to supply Indonesian natural gas to Singapore. It also made an unsuccessful bid for rival Barrett Resources that was trumped by a bid from Williams Companies.

As part of its strategy to refocus on core operations, in 2002 the company sold its Indonesian assets to PetroChina for $262 million. By mid-year the company had raised about $1.2 billion through the disposition of oil properties worldwide.

Over this decade Devon Energy bought its way into the big leagues as a North American producer through a series of multibillion-dollar acquisitions of oil and gas producers, including Ocean Energy in 2003 for $3.5 billion and US-based Chief Holdings LLC in 2006 for $2.2 billion.

In 2007 Devon began to divest all of its assets in West Africa. It sold its oil and gas business in Egypt to Dana Petroleum for $375 million and its Gabon assets for $206 million.

In 2008 it sold its oil and gas business in CÔte d’Ivoire to Afren plc for $205 million and in Equatorial Guinea (to that country’s national oil company, GE Petrol) for $2.2 billion.

In 2010 it sold most of its remaining international assets to BP for $7 billion. As part of this deal BP sold undeveloped oil sand leases in Canada to Devon Energy for $500 million and formed a joint venture with the company to exploit them.

Consolidating its North American assets to just its onshore properties, In 2010 Devon Energy sold its stakes in the Cascade, Jack and St. Malo fields in the Gulf of Mexico (about 200 million barrels of estimated recoverable reserves) to AP Moller-Maersk’s oil unit for $1.3 billion.

It also sold its remaining Gulf of Mexico shelf assets to Apache for $1 billion. In 2012 it sold its last international offshore asset, in Angola, for about $71 million.

Boosting its financial resources, in 2012 Devon Energy secured a commitment from Sinopec International Petroleum Exploration & Production for the Chinese company to invest $2.2 billion in exchange for one-third of Devon’s interest in five new joint venture plays in the Tuscaloosa Marine Shale, Niobrara, Mississippian, Ohio Utica Shale, and the Michigan Basin.

That year it also closed a similar $1.4 billion joint venture deal with Sumitomo Corp. to develop 650,000 net acres in the Cline Shale and the Midland-Wolfcamp Shale in West Texas.

The creation of EnLink improves the diversification and growth of midstream holdings, while preserving Devon’s capital for its core business.

In a cost savings move, in 2013 the company closed its office in Houston and consolidated its US personnel into a single operations group at its corporate headquarters in Oklahoma City.