Everything About Pioneer Natural Resources – $PXD.US the independent oil and gas company 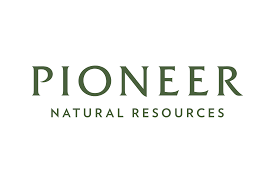 What Pioneer Natural Resources is doing in more details?

Pioneer Natural Resources Company explores for and produces oil, gas, and NGLs in the Permian Basin of West Texas.

With some 680,000 net acres containing proved reserves of 1,136 million barrels of oil equivalent, this independent energy company is one the biggest energy producers in the Permian Basin.

Where Pioneer Natural Resources is Operating?

Pioneer’s single operating segment engages in oil and gas development, exploration and production, primarily in the Spraberry/Wolfcamp oilfield in the Permian Basin.

Pioneer’s oil and gas generates approximately 50% of the company’s revenue. Its sales of purchased oil & gas (roughly 50% of sales) enters into pipeline capacity commitments in order to secure available oil, NGL and gas transportation capacity. Derivative gain and interest and other generates the remaining.

Where is the geographical reach of Pioneer Natural Resources?

Pioneer, headquartered are in Irving, Texas, holds 680,000 net acres in the Permian Basin in Texas with most of its wells located in the Spraberry/Wolfcamp oil field.

What is Pioneer Natural Resources’ Sales and Marketing Strategy?

The company sells its oil production at the lease and the sales contracts governing such oil production are tied directly to, or are correlated with, New York Mercantile Exchange (NYMEX) West Texas Intermediate (WTI) oil prices.

In the last five years, the company’s net income has followed a similar trend: it fell from a negative $ 273 million in 2015 before recovering back to healthy profits in the following two years. The company’s revenue declined from $978 million in 2018 to $756 million in 2019.

The primary components of the $222 million decrease in earnings attributable to common stockholders include: a decrease in the gain (loss) on disposition of assets; an increase in DD&A expense; a decrease in net sales of purchased oil and gas due to a decrease in downstream oil margins on the company’s Gulf Coast refinery and export sales; restructuring charges associated with the company’s corporate restructuring program and changes in forward commodity prices and the cash settlement of derivative positions.

The company’s cash and cash equivalents declined by $120 million, ending 2019 with $705 million on hand.

Cash from operations decreased by 4% to $3.1 billion in 2019 compared to $3.2 billion in 2018, while cash from investing used $2.4 billion. Financing activities used $788 million, mainly for purchases of treasury stock.

Pioneer wants to be America’s leading independent energy company, focused on value, safety, the environment, technology and its greatest asset, its people.

The company’s long-term growth strategy is centered on a few strategic objectives. To ensure financial flexibility, the company maintains a strong balance sheet.

It also includes delivering economic production and reserve growth through drilling completion and production improvement activities; utilizing free cash flow to investors through a combination of dividends and share repurchases; developing and training employees and contractors to perform their jobs in a safe manner; and stewarding the environment through industry leading sustainable development efforts.

Pioneer’s long-term strategy is anchored by the company’s interests in the long-lived Spraberry/Wolfcamp oil field located in the Permian Basin in West Texas, which has an estimated remaining productive life in excess of 50 years.

To mitigate the effect of commodity price volatility on the company’s net cash provided by operating activities and its net asset value, support the company’s annual capital budgeting and expenditure plans and reduce commodity price risk associated with certain capital projects, the company enters into derivative arrangements covering a portion of its oil, NGL and gas production.

In 2019, Pioneer divested its other assets. The company completed the sale of certain vertical and horizontal wells and approximately 4,500 undeveloped acres in Glasscock County of the Permian Basin to an unaffiliated third party for net cash proceeds of $64 million.

The company recorded a gain of $10 million associated with the sale. In the same year, the company completed the sale of certain vertical wells and approximately 3,300 undeveloped acres in Martin County of the Permian Basin to an unaffiliated third party for net cash proceeds of $65 million.

The company recorded a gain of $57 million associated with the sale. The company also sold its Eagle Ford assets and other remaining assets in South Texas (the South Texas Divestiture) to an unaffiliated third party in exchange for total consideration having an estimated fair value of $210 million.

What is Pioneer Natural Resources’ Background?

Pioneer traces its roots back to 1962 when two Texas oilmen, Howard Parker and Joe Parsley, decided to drill in the US Permian Basin. The company, Parker & Parsley, quickly gained a reputation for assembling exploration acreage and expanding its drilling activity through conservative hedges and aggressive deals.

In 1997, looking to expand into the natural gas business, Parker and Parsley merged with MESA Inc. and changed its name to Pioneer Natural Resources.

What is Pioneer Natural Resources’ History?

The 1997 merger of MESA and Parker & Parsley moved quickly to pull itself out of the dry hole created by its own debt and the industry’s late-1990s dropoff. Parker & Parsley began in 1962 as a partnership between geologist Howard Parker and engineer Joe Parsley.

In 1977 it began drilling wells in West Texas. Southmark, a Dallas real estate firm, bought the company in 1984; in 1989 management purchased it from Southmark. The company went public in 1991.

Richard Rainwater took control of MESA and then merged the firm into Parker & Parsley, which became Pioneer Natural Resources. The company moved into Argentina when it paid $1.2 billion for Calgary-based Chauvco Resources in 1997.

To streamline operations and reduce debt, Pioneer cut its workforce, and in 1999 it sold 400 US properties to Prize Energy.

Pioneer sold oil and gas properties in Texas and Canada in 1999 and moved to consolidate its Permian Basin operations by offering to buy out limited partners. It also drilled its first deepwater well in the Gulf of Mexico and acquired additional properties in Argentina.

In 2000 the company disposed of noncore natural gas assets in Louisiana, New Mexico, and Oklahoma. At the same time, it boosted its deepwater holdings in the Gulf of Mexico. The next year the company announced successful test drilling in its prospects in Argentina and South Africa.

Pioneer also announced an oil discovery in 2001 on its Ozona Deep prospect in the Gulf of Mexico, indicating another deepwater production asset for the company. In 2003 Pioneer teamed up with Woodside Energy to conduct a joint exploration program in the shallow-water Texas Shelf region of the Gulf of Mexico.

In 2005 Pioneer sold the Martin Creek, Conroy Black, and Lookout Butte oil and gas properties in Canada to Ketch Resources for $199 million. That year it acquired oil and gas assets in the Permian Basin and South Texas for a total of $177 million.

Realigning its exploration portfolio, the company sold all of its operations in Argentina in 2006 to Apache for $675 million. That year Pioneer sold the bulk of its Gulf of Mexico oil and gas assets to Marubeni Offshore Production for $1.3 billion.

In 2007 the company sold its Canadian subsidiary to Abu Dhabi National Energy Company PJSC for $540 million. In 2009 the company reported a sharp dip in revenues as the result of global recession’s impact on lowering commodity prices and weakening demand for oil and gas.

Although Pioneer made about $89 million of property acquisitions (primarily in its South Texas shale) in 2009, financial conditions prompted the company to sell non-core assets to pay down debt. It sold its assets in the Spraberry field in West Texas to a subsidiary Pioneer Southwest Energy Partners for $168.2 million. It also sold its Mississippi and shelf properties in the Gulf of Mexico for about $24 million.

To gain capital to develop its US shale properties, in 2010 Pioneer entered a joint venture, selling a 45% stake in its southern Texas gas field, Eagle Ford Shale, to the USA subsidiary of India’s Reliance Industries for $1.15 billion.

It has exited higher risk foreign ventures. To raise cash and to focus on its core North American assets, in 2011 the company sold its Tunisia-based exploration and production units to OMV for $866 million. It also sold its South African business in 2012 for $38 million.

Securing an industrial sands business to support its hydraulic fracturing drilling activities in the Wolfcamp Shale and Barnett Shale plays in Texas, in 2012 Pioneer acquired Carmeuse Industrial Sands for $297 million.

In 2013 it sold its Barnett Shale assets in North Texas to an undisclosed private party for cash proceeds of $155 million.

In 2013 Pioneer Natural Resources sold a 40% stake in 207,000 net acres leased in Wolfcamp Shale play (Permian Basin) in the southern portion of the Spraberry Trend Area Field to Sinochem for $1.7 billion.